By opting into the web form above you are providing consent for Life Skill Martial Arts to send you periodic text messages. Standard rates may apply. You can reply HELP at anytime or learn more. You may opt-out anytime by replying STOP.
Reach Your Full Potential!
BEGINNER SPECIAL!

What To Do If Your Kid Is Shy

If Your Kid is Shy…

Here are two quick tips to help your shy kid open up.

Our society places a ton of value on being outgoing. It also places a lot of judgment on being shy.

Shy kids are often made even more shy because they feel like something is wrong with them.

So, the first step is to let your child know that it’s OKAY to be shy. Let them know nothing is wrong with them, and they’re fine the way they are.

Shyness is often linked with insecurity. So if your kid feels secure with him / herself – they’ll be one step closer to opening up.

2. Set Goals & Give them rewards for a job well done.

Next, try setting goals with your kid. Tell them that if they talk to X number of kids by the end of the week – you’ll get them that toy they really want… or you’ll go to a movie… or get ice cream.

But the true reward is that they’ll make friends. And that cool toy will pale in comparison.

Important: If your kid does not reach the goal – have a conversation about it.

Don’t condemn them – but find out why they didn’t. And encourage them to do better next time.

Thank them for their effort. Let them know that you understand it isn’t easy, but that you appreciate them giving it a shot.

Then, start over the next week!

Your child will be around lots of other children, and they’ll all be working together to accomplish powerful goals. 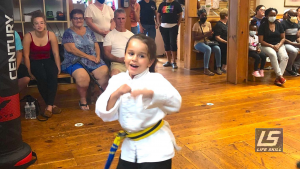 Martial arts could be a really powerful step to opening your child up, and teaching them powerful life skills in a fun way. Martial Arts helps children to build the type of confidence that extends to success at home and school everyday. In short, these goals have but one purpose: Provide classes that are results-driven, while at the same time fun!

To learn more about the powerful Life Skill childhood development program that uses martial arts as the vehicle for growth, or to get your child started at our Millbury location, click here.